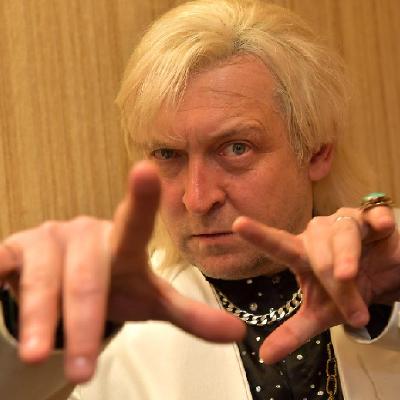 The spirit world came to Always Be Comedy in February and October 2018 and then again in September 2019 when I saw the headline act of Clinton Baptiste.  Originally seen in the classic TV series Peter Kay’s Phoenix Nights and Bolton psychic Baptiste (created by character comedian Alex Lowe) was an instant hit with the audience.

At the February show, sitting in the front row crying with laughter, I was an obvious target and was asked by the medium if my name was John. I said no and was then asked if I had a brother called John.  Again I said no and finally I was asked if I know anyone called John.  I replied yes and got a big laugh.  The audience participation was brilliantly executed by Baptiste with some great throw away lines and the crowd loved him.  At the end of his set, I gave him a standing ovation and he hugged me!

On his triumphant return in October, what was inspiring to see was the impressively high level of witty comebacks and put-downs that he had as ammunition for the unsuspecting audience member entranced under his spell which were all extremely funny.

Baptiste returned to Always Be Comedy with a brand-new work-in-progress show for his new tour.  The audience were once again witness to his psychic powers as well as some new props including a table with a mind of its own and a voodoo doll.

Along with Barry from Watford, Lowe has created two  great stand-alone comedy characters and to see Baptiste play a small room perfect for comedy was an absolute joy. The act was extremely funny on both occasions and out of this world.